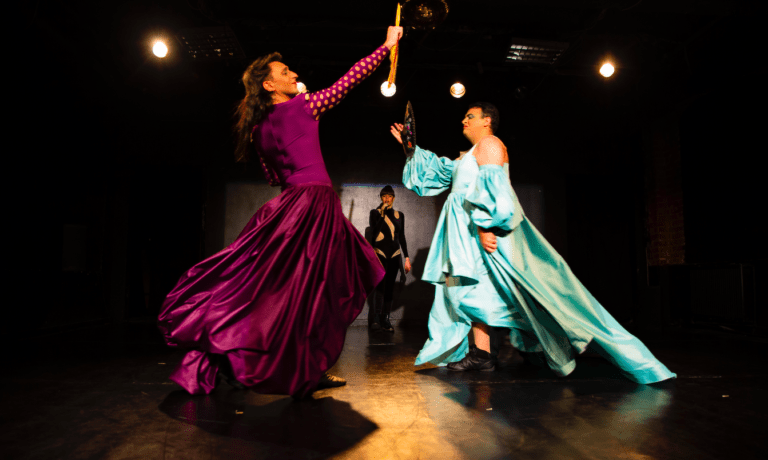 On December 11 and 12, we invite you to APR [Adoration of Radical Performance]. The performances will take place at unteatru theater.

APR is a performance about ballroom culture, about the ways in which it was born and functioned from the beginning as a resistance movement.

It contextualizes transgender and queer experiences in Romania and shows the role that night and dance play in creating a sense of belonging, family, home.

It can break your heart in places and force you to gather, in dance steps, the pieces on the floor.

Can you include in a show all the eternal gratitude and appreciation for the non-conforming bodies that, through the resistance of the dance, built the scene on which you are moving now? It’s impossible, but you will definitely have to pay tribute to them. He repeats after me: “The arms become the tool. The tool that will tell a story! ” – thanks Javier Ninja! “Let your mane continue your sentences” – thanks Leiomy Maldonado! “Forget your ego!” – Thanks Willie Ninja! Bow down in front of everything that means icon and everything that was in front of you, “because even those who left, step on the catwalk among us” – thank you Benji Hart!

The performances of the show “APR [Adoration of Radical Performance]” are part of the DIALOG project (Diversity in Arts. Learning Opportunities and Growth), funded by the EEA Grants 2014 – 2021 under the RO-CULTURE Program.

EEA grants represent the contribution of Iceland, the Principality of Liechtenstein and the Kingdom of Norway to reducing economic and social disparities in the European Economic Area and to strengthening bilateral relations with the 15 beneficiary states in Eastern and Southern Europe and the Baltic States. These funding mechanisms are established on the basis of the Agreement on the European Economic Area, which brings together EU Member States and Iceland, Liechtenstein and Norway as equal partners in the internal market. In total, the three states contributed € 3.3 billion between 1994 and 2014 and € 1.55 billion for the 2014-2021 funding period.

The RO-CULTURE program is implemented by the Ministry of Culture through the Project Management Unit and has as general objective the consolidation of economic and social development through cultural cooperation, cultural entrepreneurship and cultural heritage management. The budget of the Program is 34 million euros.

More details are available on: www.ro-cultura.ro