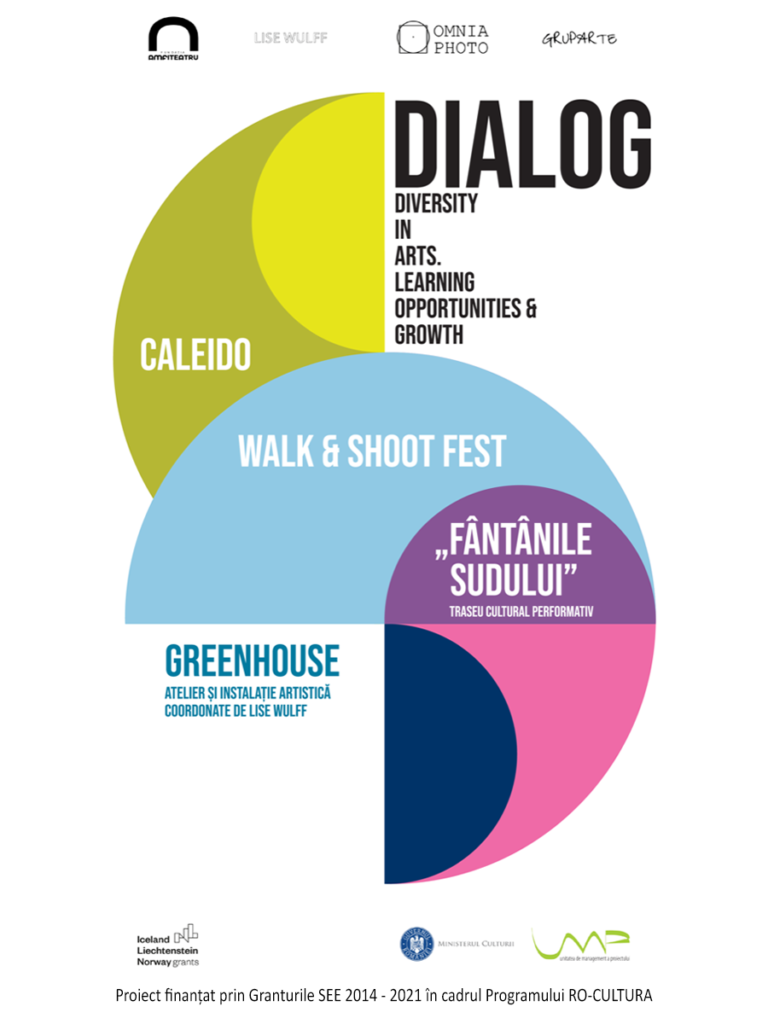 Amfiteatru Foundation, together with its partners Arts Development & Management, Lise Wulff and the Omnia Photo Association, organized an online conference on Tuesday, December 21, where the results of the activities within the DIALOG project (Diversity in Arts. Learning Opportunities and Growth) were presented.

Caleido – performing arts festival, but also the national Caleido tour, the Walk & Shoot Fest photography festival, the bilateral art workshop and the Greenhouse art installation made by Lise Wulff, as well as the performative cultural route “Fountains of the South” are the events that took place during 2020 – 2021 in DIALOG with over 7000 participants and which have in common the capitalization of the cultural identity of the communities and the diversification of the cultural offer.

The Caleido Performing Arts Festival, held May 21-25, 2021, brought together 20 independent theater, dance and performance productions, including APR – [Adoration of Radical Performance], an own production of Caleido, and as many discussions with specialists in the field (Caleido Talks), which attracted about 3400 spectators. On the caleido.ro website there are 46 articles with and about the directors of the shows within the festival.

“Even if the selection was very diverse in terms of form and aesthetic formula (theater, dance and performance) he had a coherent heart because in one way or another all the shows revolved around the theme of the society”, said Andreea Novac, artistic director Caleido.

The Caleido tour, held between November and December 2021, offered a new opportunity to meet two of the shows from the Caleido festival: “APR – [Adoration of Radical Performance]”, which had two performances at the theater (Bucharest), and ” Miss Iulia ”, which enjoyed five performances on the theater stages in Bucharest, the“ Maior Gheorghe Pastia ”Municipal Theater in Focșani, the“ Toma Caragiu ”Theater in Ploiești and the“ Fani Tardini ”Dramatic Theater in Galați, in front of over 450 spectators .

Walk & Shoot Fest, photography festival, organized by Arte Development & Management in partnership with the Amphitheater Foundation, took place between May 21 and 30 and included: 10 photography workshops held by professional photographers – show, beauty, portrait, landscape urban, documentary, street, photography for children and teenagers, portfolio evaluation -, 10 online discussions about photography and challenges in the field, as well as three exhibitions about diversity on the performing arts scene, with photos by Adi Bulboacă, Cornel Lazia, Cristian Crisbășan, Hajdu Tamás, Horia Manolache, Ioana Moldovan, Silviu Gheție and winning photos of the Walk & Shoot contest. During the 10 days of the festival, Walk & Shoot Fest attracted over 530 participants to the events.

Andreea Leu, founder of Walk & Shoot, reminded during the conference that “the visual education part will be continued in a photography resource center that will have a component of school, professional services for photographers and the public – from events until the print sale, about which we will provide more details soon ”.
Sera | The Greenhouse focuses on a series of photographs that capture nature claiming its place in the urban space and talk about the way nature relates to people. The installation is the result of a collaborative process between the artist Lise Wulff, the director of the concept, and eight young people from #StudiourileFerentari, whom she guided.
“The theme I gave to the young people from Ferentari was to photograph abandoned buildings in Bucharest and to document the way in which nature controls them. We played with the photos by applying various colored filters. Later I printed the photos and mounted them on the walls of a greenhouse, obtaining a very interesting visual impact, especially when the installation is lit from the inside “, mentioned Lise Wulff.
Photos and post-processing: Ale, Alex Dinuț, Alexia-Adriana Șerban, Lucian Berdei, Petrișor Barbu, Robert Harisiade, Ștefania Iordache, Vlad-Andrei Roșianu.

Performative cultural route “Fountains of the South” included: documentation and mapping of 57 fountains in southern Romania (guide booklet of the map of fountains and customs related to fountains in Bobicești Commune, Olt County, 2021 can be downloaded here: https: // bit.ly/3p8K6o0), a performative cultural route “Fountains of the South”, also available in digital version (https://bit.ly/3H68QoP) and the installation “What does a fountain see?” – starring “Fountain of the Orchards” from Bobicești, part of the performative route. The installation has the role of stimulating otherness and diversity, the fountain transforming from an object viewed into a narrator character, who explores and embraces with his own eye the surrounding space.
The project also included five workshops on historical and contemporary photography and drawing for children about the history of fountains in Bobicești, their construction, customs and local histories related to fountains, their positioning on the commune map.
The events of this performative cultural route attracted over 2000 participants.
“People began to become interested in the fountains, the possible stories around them, their ancestors – because some had forgotten that some of these fountains had their names written on them. When we organized the Fountain Days, at the request of the inhabitants, a fountain in the commune was consecrated again and put back into operation, made by the great-grandfather of a local who came from the Ottoman Empire to make a household here “, mentioned Cristina Irian.
At the end of the discussion, Ioan Borșan, the executive director of the Amphitheater Foundation, mentioned that “The Foundation continues its mission to develop new cultural products and to support independent artists. These events were a breath of fresh air for the artists I collaborated with in a very complicated year. It is sad that the artists have no other support from the state apart from the funding coming through AFCN. However, the Amphitheater Foundation managed to produce four shows this year, which motivates us to continue what we started five years ago with Caleido”.

Amfiteatru Foundation develops programs, projects and partnerships at the local, national and international levels, in order to affirm the anthropic and natural resources of the communities. The organization focuses on integrated, social approaches to provide solutions and support to communities. Official website: fundatia-amfiteatru.ro.

EEA grants represent the contribution of Iceland, the Principality of Liechtenstein and the Kingdom of Norway to reducing economic and social disparities in the European Economic Area and to strengthening bilateral relations with the 15 beneficiary states in Eastern and Southern Europe and the Baltic States. These funding mechanisms are established on the basis of the Agreement on the European Economic Area, which brings together the EU Member States and Iceland, Liechtenstein and Norway as equal partners in the internal market. In total, the three states contributed € 3.3 billion between 1994 and 2014 and € 1.55 billion for the 2014-2021 funding period.
More details are available at: www.eeagrants.org and www.eeagrants.ro.

The RO-CULTURE program is implemented by the Ministry of Culture through the Unit of
Project Management and has as general objective the consolidation of economic and social development through cultural cooperation, cultural entrepreneurship and cultural heritage management. The budget of the Program is 29 million euros.
More details are available on the official website: www.ro-cultura.ro.